West Palm Beach HVAC Q/A: Mold…What if I Have Mold?

No one wants to find mold. But, even if you’re not aware of it, mold is might be lurking somewhere in the damp, dark crevices of your West Palm Beach home. And mold is particularly likely to grow in homes with improperly regulated humidity. Luckily, because we know that, there are quite a few things we can do to stop the growth of mold in its tracks and save your home from unsafe air quality and the damaging effects of those little spores.

The Dangers of Mold

As mold grows, it can do damage to your woodwork and other areas of your home. It also contributes to indoor air quality issues because mold spores are a significant indoor air contaminant. Many people are allergic to mold spores, so if you or someone else in your household has experienced allergy symptoms that you can’t explain, mold spores are a likely culprit.

If you find out there is mold in your home, don’t panic just yet. There are some things you can do to address the problem and get mold out of your house for good. Your main task will be getting rid of the mold that is already there. This isn’t necessarily easy because of the areas mold tends to grow in. But, even with the proper air quality treatment, your home and health is still at risk if you don’t target that existing mold fast.

Stopping Mold in Its Tracks

Just getting rid of existing mold won’t solve the problem, though. Mold keeps coming back as long as there is an environment to support it – and that means moisture. Mold requires water to grow, so the chances are that if you have a mold problem in your home, you also have a humidity problem. Getting your indoor humidity under control will make it much easier to remove and keep mold out of your home for good.

There are plenty of good humidification systems on the market today. They can be easily integrated into your home heating and cooling system and provide great, consistent humidity control. Make sure you get one that’s large enough for your home. An West Palm Beach indoor air quality professional can help you make that determination. Once you have a good humidification system in place, you’ll notice a huge difference in your overall indoor air quality, and hopefully the problem won’t return anytime soon.

The Many Benefits of Ductless Mini Split Air Conditioning 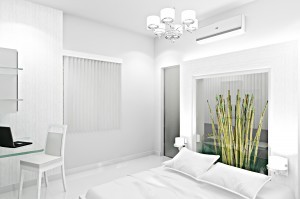 Ductless mini split systems offer a lot of different options for interior design. The indoor air handlers can be installed in many locations; suspended from the ceiling, hung on the wall, and there are even floor standing models available. They are usually only 7 inches deep and have a sleek, attractive appearance, making them fit in well in many homes. To work with their versatile installation, some offer remote controls to make it easier to turn the system on and off. For more information about having a ductless mini split system installed in your home, call your West Palm Beach HVAC contractor!

Cool air on a hot day is a precious commodity, but modern technology has made it as basic in our lives as a part of most homes, businesses and the places we visit.  Often taken for granted, the process of air conditioning in Palm Beach has many components that combine to give us peace of mind and a good night’s sleep.

When evaporating into a gaseous state, the refrigerant absorbs heat.  Compressed tightly together again, it condenses back into liquid, releasing that heat in the form of condensation which can be evacuated to the outdoors. Air is blown over the cooled liquid in the circulating system and distributed to the rooms through a system of duct works.

The refrigerant circulates through a closed loop system and maintains a delicate balance of pressure to compel its transformations. There are four components to the system:

Starting with a compressor, the molecules are packed together tightly, creating and absorbing heat and becoming liquid.  The heated liquid enters the condenser coils, a series of delicate fins which allow the heat to dissipate to the outside.

The expansion valve controls the amount of liquid entering the evaporator coils.  If too much refrigerant is allowed at once, the system “floods” and is too dense to evaporate.  If there is too little, it idles inefficiently.

The evaporator coils are similar to the condensing coils with a series of fins, only these absorb heat from the conditioned space as the expanding refrigerant returns to gas and heads towards the compressor.

Unlike the closed loop refrigerant system which is all about containment and control, the distribution system is about sending the heated and cooled air in different directions.  Employing two fans and extensive duct work, the heat is absorbed at one point and released to the outside at another.

Warm air from the conditioned space is blown over the evaporating coil where the heat which is needed to fill the expanding spaces between molecules gets absorbed by the gas.  The same blower that draws the heated air blows the cooled air back into the home, office or business.

Along the condensing coils, during the process of returning to liquid, the heat is released and blown to the outdoors by a second fan.

To learn more about how to keep your home cool this summer, give Envirotech Air Quality Services a call!

If you moved into a new home in Palm Beach or had someone change the filters on your heating or air conditioning system for you, you may notice that whoever did the job put on the wrong size filter. This is not uncommon and is usually the result of an effort to save either time or money. However, in the long run it actually costs both. Here is how you can fix the problem of a wrong size filter.

If you have a filter that is too big for your system, it may seem like an easy enough fix– just fold it over or trim it down, right? Not so fast.

Folding the filter over makes for an imperfect seal. Air will leak through and around the bend, bypassing the filter entirely. This causes dirt and debris to build up on the fan, slows down air flow, degrades performance, decreases air quality and overall makes a big mess that you will have to pay to fix or clean up later.

Bending or cutting the filter also decreases its structural integrity. The whole filter can collapse while installed, creating not just a performance issue and a potentially costly repair, but also possibly creating unsafe conditions.

Furthermore, don’t give into the temptation to run your HVAC system without a filter for the time being. The debris will quickly build up in your AC system, as well as being blown into your home. Heating and cooling systems should always be operated with the proper filter installed.

So, what do you do when you have an air filter that is the wrong size? The only solution is to find the right size. If you are having trouble finding the right air filter for your system, try these tips:

Above all, never operate your HVAC system without a clean, correctly sized filter properly installed. If you need any help with your Palm Beach heating and air conditioning system, give Envirotech Air Quality Services a call today!

Air conditioning is a modern convenience that we can easily take for granted in Boca Raton as long as all the parts are working well.  In every unit, no matter the size, the basic process is one of extracting heat from the conditioned space and moving it to the outside, leaving cool air in its place.

This process easily divides into indoor and outdoor components.

Based on the principal of thermal energy which states that heat gravitates toward cooler temperatures, compounds known as refrigerants are moved through a closed loop system, repeatedly contracting and expanding between liquid and gas forms, alternately releasing and absorbing heat along the way.  The particular chemicals are selected for their abilities to transform from one state to the other at low temperatures.

While the refrigerant evaporates into a gaseous state within the looped system, it absorbs heat, removing the stale air from the space being conditioned and evacuating it to the outdoors. The warm air is pulled through ducts to meet with the cooling loop.

The cooled air is distributed through ducts or tubing and released into individual spaces.  Additional ductwork is required to remove the stale air and pull it back to be reconditioned as it passes over the loop containing the refrigerant.  The air is moved in both directions by a blower, usually electric and sized to handle the amount of air no matter the building.

Ductwork is also sized to handle appropriate volumes of air. To maintain efficiency, large trunks distribute along central lines to smaller ones reaching farther out. The return air is usually taken from common areas.

The grates are found in the walls, floors and often as part of the dropped ceiling. When combined with a forced air heating system, the total energy use is much more efficient.

The refrigerant is enclosed in a loop where it can expand and contract to make its transformation from gas to liquid and back again.  To change into a heat-absorbing gas, it travels through the evaporating coils, an intricate series of delicate fins that meets with the ductwork to regenerate the conditioned air.

An exchange valve allows just the right amount of liquid refrigerant into the evaporator coils.  If there is too much, the tube is flooded too tightly to allow expansion of the molecules and room to attract the heat.  If too little, the process is inefficient.

When set up and maintained on a regular basis, your Boca Raton AC system functions with little attention and over sight.  Call Envirotech today to schedule your annual maintenance tune-up!

We use the Best Products

We accept the following payment types: